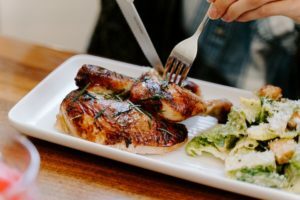 Niacin (also known as vitamin B3) is one of the water-soluble B vitamins. Niacin is the generic name for nicotinic acid (pyridine-3-carboxylic acid), nicotinamide (niacinamide or pyridine-3-carboxamide), and related derivatives, such as nicotinamide riboside. Niacin is naturally present in many foods, added to some food products, and available as a dietary supplement.

The most sensitive and reliable measure of niacin status is the urinary excretion of its two major methylated metabolites, N1-methyl-nicotinamide and N1-methyl-2-pyridone-5-carboxamide. Excretion rates in adults of more than 17.5 micromol/day of these two metabolites reflect adequate niacin status, while excretion rates between 5.8 and 17.5 micromol/day reflect low niacin status. An adult has deficient niacin status when urinary-excretion rates are less than 5.8 micromol/day. Indicators of inadequacy such as this and other biochemical signs (e.g., a 2-pyridone oxidation product of N1-methyl-nicotinamide below detection limits in plasma or low erythrocyte NAD concentrations) occur well before overt clinical signs of deficiency. Another measure of niacin status takes into account the fact that NAD levels decline as niacin status deteriorates, whereas NADP levels remain relatively constant. A “niacin number” (NAD/[NAD + NADP] concentrations in whole blood x 100) below 130 suggests niacin deficiency. A “niacin index” (the ratio of erythrocyte NAD to NADP concentrations) below 1 suggests that an individual is at risk of developing niacin deficiency. No functional biochemical tests that reflect total body stores of niacin are available.

Severe niacin deficiency leads to pellagra, a disease characterized by a pigmented rash or brown discoloration on skin exposed to sunlight; the skin also develops a roughened, sunburned-like appearance. As pellagra progresses, anorexia develops, and the affected individual eventually dies. Niacin inadequacy usually arises from insufficient intakes of foods containing niacin and tryptophan. It can also be caused by factors that reduce the conversion of tryptophan to niacin, such as low intakes of other nutrients. The following groups are among those most likely to have inadequate niacin status: malnourished individuals; people with Hartnup disease; and people with carcinoid syndrome. Despite numerous claims, experts do not agree on the value of nicotinic acid to treat cardiovascular disease, especially given its side effects, safety concerns, and poor patient compliance.

No adverse effects have been reported from the consumption of naturally occurring niacin in foods. However, high intakes of both nicotinic acid and nicotinamide taken as a dietary supplement or medication can cause adverse effects, including hepatotoxicity.

Niacin is present in a wide variety of foods. Many animal-based foods—including poultry, beef, and fish—provide about 5-10 mg niacin per serving, primarily in the highly bioavailable forms of NAD and NADP. Plant-based foods, such as nuts, legumes, and grains, provide about 2-5 mg niacin per serving, mainly as nicotinic acid. In some grain products, however, naturally present niacin is largely bound to polysaccharides and glycopeptides that make it only about 30% bioavailable. Many breads, cereals, and infant formulas in the United States and many other countries contain added niacin. Niacin that is added to enriched and fortified foods is in its free form and therefore highly bioavailable.

Tryptophan is another food source of niacin because this amino acid—when present in amounts beyond that required for protein synthesis—can be converted to NAD, mainly in the liver. The most commonly used estimate of efficiency for tryptophan conversion to NAD is 1:60 (i.e., 1 mg niacin [NAD] from 60 mg tryptophan). Turkey is an example of a food high in tryptophan; a 3-oz portion of turkey breast meat provides about 180 mg tryptophan, which could be equivalent to 3 mg niacin. However, the efficiency of the conversion of tryptophan to NAD varies considerably in different people.

Selected Food Sources of Vitamin B2